After the Tuesday addition of the roof beams, Wednesday was another quite day. The roof beams gained some bolts, and the building inspector inspected the building, but otherwise no progress was made.

Thursday started similarly, but by the time I got home from work, it was clear that the glazier had been, as there was now a window for the toilet and another for the dining room: 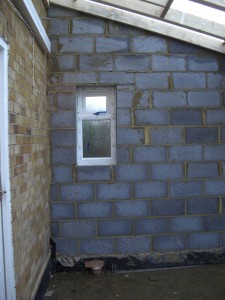 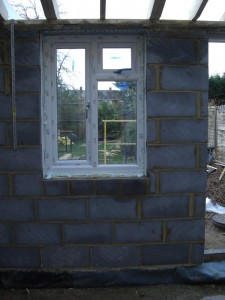 Unfortunately there were also two large panes of glass which looked like they were intended for French doors. Unfortunate because we thought we were getting wooden doors, and these were clearly the property of uPVC-man. A call to the builder confirmed our fears – and also made it clear that switching to wooden doors would not only entail more expense, but also hold up the rest of the build, as the site wouldn’t be watertight until the doors were in place. Reluctantly we agreed to continue with the uPVC doors.

This was particularly galling given that we’d had a chat with the builder a couple of days earlier to confirm when we’d need to select and order the doors. Unfortunately while we were most definitely talking about the external French doors, he thought we were talking about some internal doors which we’re having fitted at the same time (because, Mr Builder, they were supposed to match the external ones!).

One thing I’ve learnt from this is that, shold I ever undertake anything like this again, I’ll be far more pedantic about specifying as much as I possibly can about the build at a much earlier stage in the planning process.

Anyway, having accepted the inevitable, Friday brought us some doors: 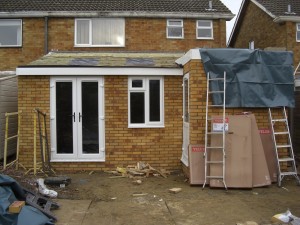 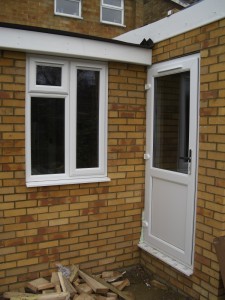 As Saturday arrived I felt sure I’d finally be able to have that lie-in I’d been longing for. But yet again tradesmen arrived on-site, disturbing my peace. This time it was the roofers. At least it resulted in a breathable membrane, batons for the tiles, and a vaguely waterproof extension: 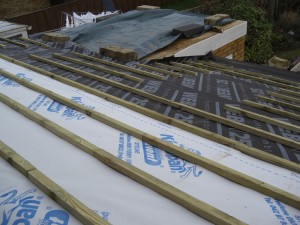 (The photo of the French doors shown earlier was taken on Saturday, after the roofing had been done, in case you thought there had been any time travel or deception involved)

What’s that, you ask? How was the garden looking at this point? 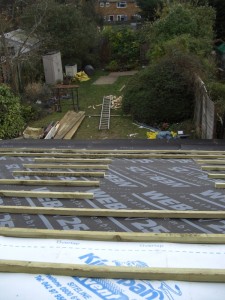 Next time: My continuing battles with uPVC…