It took a further day for the trenches for the foundations had been dug out. Running right along the middle of one trench was a drainage pipe which carries rainwater run-off from all the roofs along the street – I couldn’t have planned a worse position for the wall if I’d tried. As expected, the building inspector insisted on the pipe being moved – adding three manholes and some extra expense to the job. As a short term measure the pipe was redirected into a short trench which was sealed from the main trench with bricks and earth, then the pipe was loosely stuffed with a bung of cloth. 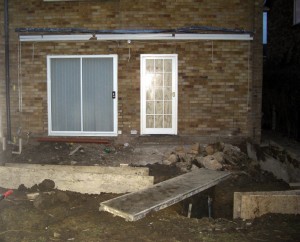 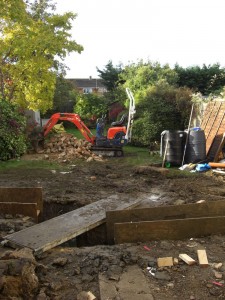 That night there was rain. Not much rain – just a few small puddles here and there. But even a little rain, when captured by every roof in the street and redirected into my back garden, is quickly enough to seep through the brick-and-earth blockage and into the trenches. The following morning was Saturday, and the builders had booked the concrete for 11am. They arrived on site early, then quickly left again in order to fetch a pump: our trenches were about 4 feet deep with water.

Thankfully the pump did its job, and the trenches were dry enough to pour with concrete when the truck arrived. By 2pm we had footings. 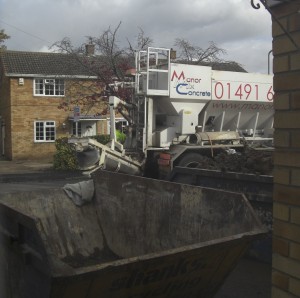 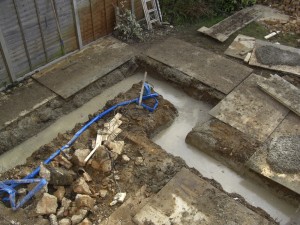 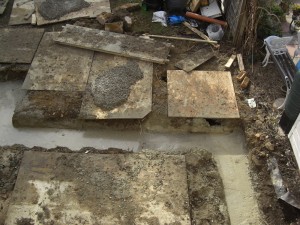 In the image above you can make out the extra trench into which the street’s rainwater is discharging, hiding under the board on the right.

At the end of the first week, my garden looked like… well… a building site: 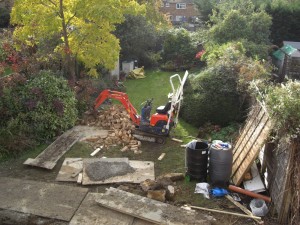 With the foundations set, the next step was to dig out the inside of the extension and lay the first course of bricks…