The presence of uPVC French doors instead of the wooden ones I was expecting was a huge disappointment to me. There are various reasons for the mistake – all of which boil down to a lack of communication. Perhaps we didn’t make it clear enough what we wanted when the architect drew up the plans (although the plans don’t actually specify any material, just double-glazed with a minimum thermal efficiency). Perhaps we didn’t make it clear enough when the builder originally quoted. Or during our initial discussions or the earlier stages of the build. But at least part of the blame lies with my meeting with the glazier.

I hadn’t been told that the glazier was coming to measure up. If I had been, I would have been more prepared than I was. Instead I was waiting for my car-share to pick me up for work when he arrived. If I’d known he was coming, I’d have arranged to drive myself in a little later. I still had a few minutes to kill, though, so I made him a cup of tea, checked that my lift hadn’t arrived yet, then took it out to him.

“So, this window here”, he said, pointing to the WC window, “… just a single pane with a fly opener, right?”

“Erm… yes, that sounds okay.” I wasn’t really prepared for questions, but this seemed fairly straightforward.

“And the door here,” by the utility room porch, “which way is it opening?”

I told him. He confirmed with a quick “so hinges on this side, right?” So far, so good.

“And what about this window?” he asked, gesturing at the gaping wound into the dining room. I was thrown.

“Erm… I’m not really sure. What do you recommend?”

He thumbed his chin pensively, took a deep breath, and proceeded. “Well… we could go for a split pane, opener on one side, fly opener on the top. Sound okay to you?”

He put his A4 pad in front of me. The page was completely blank apart from the few measurements he’d taken.

“Something like this…” He proceeded to ignore the acres of white space before him, and drew a postage-stamp sized sketch: a rectangle with a couple of chevrons on it, which I guess is glazier-code to indicate what opens where. Conscious of my lift arriving any second, and feeling the pressure to make some sort of on-the-spot decision, I nodded as though his sketch had suddenly cleared the fog in my mind. “Erm… yeah, that’ll be fine,” I said.

“And you’ve got French doors going in here, I suppose”.

“And the rest of the house is already double-glazed, is it…?” he asked resignedly, clearly disappointed that he’d missed his chance to upsell me on a whole house conversion.

That one question near the end was the sole interaction I had with him about the French doors. I didn’t see him measure the void (which would have sent alarm bells ringing), and neither did he ask me any questions about them. I assumed that his statement had been along the lines of “you’ve got French doors going in here, and they’re nothing to do with me”. Clearly I was wrong.

Apart from the French door fiasco, one other problem began during that meeting: the dining room window. I’d agreed to something, though if I was honest with myself I wasn’t really sure quite what. I kind of had an idea of what I was getting, but when it arrived it seemed to me that there was a whole lot more plastic than I’d anticipated. Ignoring the fact that the garden hardly looks at its best right now, I still would have liked a slightly better view of it than this: 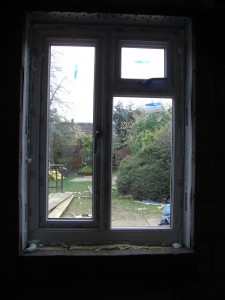 We had to accept the French doors, otherwise the whole build would have been put on hold. If we’d got the doors I was expecting, then perhaps I would have left the window as it was. But the two interfaces between the dining room and the garden were both a disappointment, and if I couldn’t do anything about one of them, I’d bloody well make sure I did something about the other.

So we now have a replacement window on order. A large bottom pane, and a smaller top opener. Unfortunately, as the glazier did actually provide what I’d agreed to originally, we’re liable for the cost of the replacement 🙁

Next time: The first fix begins…