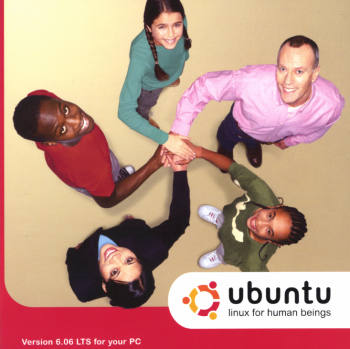 Things have changed a little since the last batch arrived; there’s now only a single CD which acts as both a Live CD and an installation disc (previously these were two separate discs). The new arrangement means that there’s slightly less Windows software on the CD (no OpenOffice.org this time), but that’s a small price to pay. In exchange for this minor loss you get the ability to run the Live CD and then run the installation program within the live environment – a much simpler arrangement for most people.

I’ve actually been running this version of Ubuntu for a few weeks now: it was made available via the normal software update tool, so starting the upgrade from version 5.10 to 6.06 was as simple as clicking on a button. I look after the PC of a less-than-technically-competent friend, which also runs Ubuntu, and the upgrade was so straightforward that I was able to talk him through it in just a couple of emails.

This really is the slickest Ubuntu release yet, and my praise goes out to everyone who has worked on it. At some point I’ll chat about it a bit more (and probably post some screenshots), but in the meantime if you want to try it for yourself you can either download a copy, or request that they send you some CDs – in either case there’s no charge and you can try the Live CD without affecting your Windows installation. What have you got to lose?