Yesterday I received a package in the post containing this: 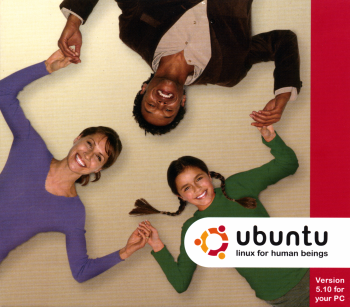 More precisely, that is a scan of a cardboard sleeve which holds a pair of CDs containing the Ubuntu Linux distribution. The first CD is a full installation disk with which to install a copy of Ubuntu onto a PC. The second CD is a “live” CD – you simply pop it into the drive on your PC, reboot, and within a few minutes your PC is running a copy of Ubuntu from the CD. It’s effectively a demo version – you get to try Ubuntu out without affecting your hard drive – but it can also be very useful as a rescue disk if you know what you’re doing (I often use such live CDs to recover data from Windows machines that won’t run properly).

A default Ubuntu installation gives you a desktop operating system, much like Windows or MacOS, but with dozens of applications already installed. As well as the usual complement of a web browser (Mozilla’s Firefox), email client and text editor it also includes a full office suite (OpenOffice.org), games, instant messaging client (Gaim), image editor (Gimp) and a whole lot more. Hundreds of additional programs are available for free download with just a few mouse clicks.

If you’re still stuck with Windows and don’t want to switch to Linux you can also pop in the live CD and install Windows versions of Firefox, OpenOffice.org and Gaim. Firefox in particular is widely accepted as being a far better web browser than Internet Explorer, and OpenOffice.org can easily replace Microsoft Office for most people’s needs, without the expense.

So, to recap, my cardboard sleeve contains a pair of CDs featuring a full operating system with dozens of applications, a version of the same which runs live from the CD, and Windows versions of some of the best applications. But the package actually contained more than just a pair of CDs in a nice sleeve. It contained ten pairs of CDs in cardboard sleeves. And another three pairs of CDs for use with 64-bit PCs. And finally a couple more packs for use on Apple Macintosh machines. That’s a total of fifteen cardboard sleeves or thirty CDs.

It’s also worth noting that I can legally copy these CDs and give them away to anyone I wish. And each CD can be used to install Ubuntu onto as many machines as I wish, without having to pay any additional licensing fees.

So how much did this little package cost me? Nothing. Not even the cost of postage. As unbelievable as it might sound in our dog-eat-dog world, those nice people at Canonical (the company which sponsors a lot of the Ubuntu development) will send out CDs to anyone who requests them. You just have to visit https://shipit.ubuntu.com/ and create an account (it’s free of charge, and they won’t use your details for anything else). It may take a few weeks for your CDs to arrive, but if you’re in more of a rush you can download copies from http://www.ubuntulinux.org/download/ (again, free of charge).

So if you’re fed up with having to worry about viruses and spyware why not get a copy of the live CD and give it a try? If you want a powerful office suite without the expense of Microsoft Office, why not grab the live CD and give OpenOffice.org a try? If you want to breathe a new lease of life into an otherwise ageing computer then trying a free CD has got to be better than just taking it down to the dump.