A couple of months ago I decided that it was finally time to re-rip my CDs. Not only were there numerous discs which hadn’t yet been converted to mp3 at all, but now hard drives were cheap enough for me to rip at a higher quality.

I purchased a 160GB drive, and started to rip. Thankfully hardware has moved on since I last did this, so ripping a CD was a faster-than-realtime affair – though it still took me a few months to finish the job. This wasn’t helped by my decision to be more fussy about getting the tag details correct and consistent, but as I don’t intend to rip these CDs ever again I figured it was probably worth the extra effort at this stage.

I chose to encode to FLAC – a lossless audio format which is smaller than a straight CD copy (though much larger than an mp3), but which retains all of the original data (mp3 is a “lossy” format in that it achieves its high compression ratio by throwing out bits of the audio that it thinks you won’t hear). By converting to FLAC I shouldn’t have to rip the CDs again – instead I can simply re-encode the FLAC files to another format whenever I need to. It might be 128Kbps mp3 files today, 384Kbps mp3 files next year, or some completely different format at some time in the future. Never again will I have to feed hundreds of CDs into a computer: I can just set a conversion program running against a directory full of FLAC files.

Sod’s law stepped in, and I found that my collection has grown to the point where my 160GB hard drive is just slightly too small to hold it. Damn. So I bought an external 250GB drive instead – which also has the advantage that I can keep it separate from my CD collection as an “offsite backup” in case of any real disaster (though the sort of disaster that would wipe out my entire CD collection doesn’t bear thinking about and an offsite backup of my music isn’t likely to be much of a comfort).

I used the CD ripper that comes with Ubuntu to do the initial rip to FLAC, EasyTAG to tidy up the track data, and flac2mp3 to convert the files to mp3 for use on my iPod (and to take up less space on my main computer). The conversion took a long time – about 60 hours for the 5000 or so files – but it didn’t require any intervention so I just left it going for a few days (with the occasional wiggle of the mouse to check that the machine hadn’t hung).

I also decided to scan all the CD covers. The audio player on my Linux box (Amarok) can grab covers from Amazon, but I wasn’t happy with the variable quality of this approach. I only scanned the front covers, and saved the resultant files as JPEGs (albeit at a larger physical size than most of the Amazon images), so maybe one day I’ll re-scan all the content of the CD booklets and save it at a high resolution in a lossless format. Until I find an audio player that will actually do anything useful with the extra images, however, I don’t think I’ll bother.

This is the result of all that effort (click for a slightly larger version, about 500KB in size), somewhat scaled down: 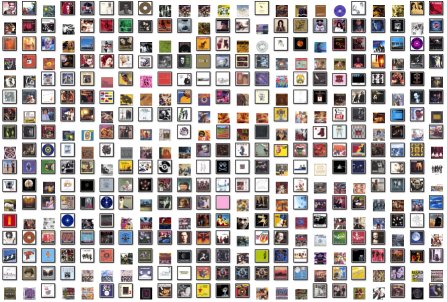