Last night I went to the free Add-ons workshop that Mozilla hosted in London. It was an informative and interesting evening – well worth the trek down to London, even if it did then lead to a late-night trek back again.

Particular highlights of the evening were:

There was also a stand with some free Firefox merchandise – mostly badges, pens and lanyards – but I did pick up a sheet of Foxkeh stickers for my girlfriend who is a big fan of the cute character, and uses the Foxkeh monthly desktop backgrounds on her computer (you might want to read this if you’re an English rather than Japanese speaker): 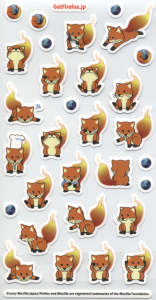 I’ve often wondered why the EU and US arms of Mozilla don’t make more use of Foxkeh in their marketing. He gets commented on by a lot of people that see my girlfriend’s desktop, which inevitably leads to conversations about what Firefox is, and how it differs from Internet Explorer. A mascot that leads to spontaneous discussions like this is surely something that should be used more widely.

Although many aspects of these demos will only become available in Firefox 4 (or nighties and pre-release versions thereof), it’s worth noting that SVG clipping, masking and filtering of HTML (including Ogg Theora video) works right now in Firefox 3.5, as demonstrated by my own post on using Inkscape filters in Firefox.